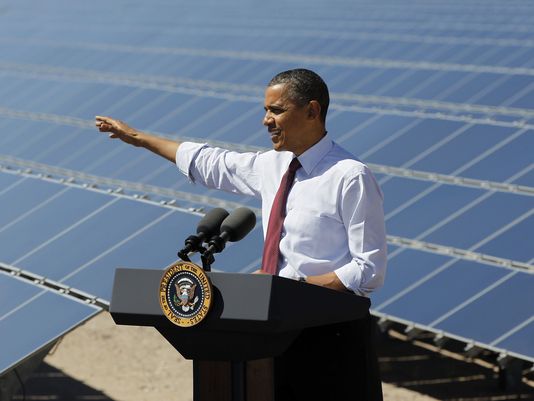 Those technical challenges are a particular hurdle for low- and middle-income customers — and that’s why the Obama administration is pushing a solution known as community solar.

The White House hosted a summit Tuesday to bring together major solar players to figure out ways to expand retail solar power from traditional rooftop arrays to a model in which households and businesses invest in shared solar systems. The administration announced that 68 cities, states, and businesses had signed on to a White House initiative to promote community solar, with an emphasis on low- and moderate-income households.

Those commitments are expected to bring solar power to to more than 20,000 households in 21 states, the White House said. And, just as importantly for President Obama, it will allow the United States to expand its use of clean energy as Obama prepares to travel to Paris for an international climate summit where he’ll press other companies to make similar strides to reduce carbon pollution from fossil fuels.

Tuesday’s National Community Solar Summit shows that Obama doesn’t need to be in the room in order to use his pen-and-phone strategy on environmental policy. With the president half a world away in the Philippines, the White House hosted about 100 players in solar power — from researchers, non-profits, local governments, for-profit companies and utilities — for an eight-hour meeting in the Eisenhower Executive Office Building.

“Community solar is complicated to make it work. And it’s scaling so rapidly that you need a lot of people coming together to get all the pieces to fit,” said Tom Hunt, Vice President of the Clean Energy Collective, a Colorado-based company. The company helps utilities provide community solar by structuring the projects to meet federal and state regulatory requirements, which often stand in the way of alternative power sources.

Another participant, Michelle Moore of the nonprofit Groundswell, works as a community organizer to try to create markets for community solar power in places where it doesn’t yet exist. She said the White House summit was helpful in bringing for-profit utilities, cooperatives, local governments, non-profits and financiers together to make connections.

“Our role is organizing customers so that they’re able to have more of a say in what kind of energy they want and how they want to buy it,” said Moore, a former environment policymaker at Obama’s White House Council on Environmental Quality. “It’s a way to buy into a solar project without a home construction project.”